Early in the morning of May 1st, 10 people from First Mennonite Church of San Francisco joined with approximately 100 others to shut down the Immigration and Customs Enforcement (ICE) building and create a beautiful street mural.

Our goal was to express solidarity with immigrants who are caught in the clutches of ICE and/or facing deportation. We wanted to bring awareness to this injustice and saw May 1st, International Workers’ Day, as a good opportunity.

At 7:45 a.m. we mobilized and the action began. By 8:00 a.m. the mural was already underway and the vehicle entrances were blocked. Around that time other protesters began arriving for the rally which was planned in front of the ICE building.

For those of us risking arrest, we kept our spirits up by singing songs and chanting. I enjoying playing the role of song leader as we sang, “Woke up this morning with my mind set on freedom…” and “Ain’t gonna let nobody turn me around” and “We shall not be moved” and “We are building up a new world.”

We chanted “No ban, no raids, no wall. Sanctuary for all!” repeatedly and were cheered when the rally marched around the block. Our non-violent direct action team was on the back side of the building and therefore unable to participate in the rally otherwise.

Although the police were present they did not arrest anyone nor did any vehicles pull out of the garage and create a stand off. The support for our team was wonderful and everyone was in high spirits throughout the action.

It was meaningful to know that I was doing this along with others from First Mennonite Church. It gave me strength and courage knowing we were in it together, no matter what. I also had the opportunity to get to know others through the action and look forward to continuing those relationships.

In this short video you’ll catch glimpses of those of us from FMCSF. I especially like the ending where my direct action team, the ICEbreakers, are singing “Woke up this morning with my mind set on freedom…”

After this first experience of risking arrest, I am eager to be involved in more non-violent direct action. Power to the people! 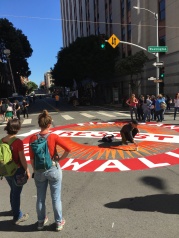